The Harry Potter series of books and movies is likely the most influential work of fiction for my generation of “late millennials.” And if you don’t believe me, I challenge you to find one serious political event that some twentysomething doesn’t immediately equate to a Harry Potter storyline. And while I consistently roll my eyes when people say Nancy Pelosi is leading Dumbledore’s Army or whatever, I was and still am a fan of the films. However, I haven’t seen any of the movies in a number of years, and before this recent fixation on the event that this article is about, I only thought about Harry Potter whenever J.K. Rowling would tweet out the sexual desires and proclivities of her characters.

In the first Harry Potter film (called the Sorcerer’s Stone in America yet the Philosopher’s Stone, likely because Americans have more respect for magic than deep thinkers or something) Hagrid takes Harry to Diagon Alley. It’s the first time you see the wizarding world at work, and it is fun and enchanting and all of those things. But it’s something that happens after all of the magic that I can’t stop thinking about. It’s not when he gets his broom, or when Hagrid gets the stone, or even the really great scene where John Hurt (RIP) gives him his wand. I want to talk about what happens after.

Hagrid and Harry are in The Leaky Cauldron, a wizarding bar. Harry is reserved. Hagrid asks what’s wrong. Harry says he is wondering about the man that killed his parents and gave him that famous scar. Hagrid is reticent to explain because, as any person who is insistent about which house they’d be sorted into will tell you, you do not say the guy’s name out loud. This guy is of course Voldemort. Most characters in the books/movies will say things like “You Know You” or “He Who Must Not Be Named,” but Hagrid just clams up. Then comes the exchange I keep replaying.

I’ll just put a screenshot from the script I found on the Internet.

Do you see what I’m held up on? Hagrid can’t spell “Voldemort?” I know, I know, spelling isn’t everyone’s strong suit, but we’re not talking about Reykjavik or even restaurant. Voldemort is spelled exactly how it sounds. Maybe you could think the second syllable has an “a” in it instead of an “e,” but that’s a minor difference, and it would still sound like Voldemort! What’s more, you mean to tell me that he never saw the most infamous, powerful wizard of all time’s name in writing? Doubtful.

This is why I’m worried about Hagrid’s education and, quite frankly, the general education offered at Hogwarts. You get into Hogwarts at the age of eleven, and while I would expect the average nine year old to be able to sound out “Voldemort,” I’ll give Hagrid a curve of a couple extra years since it’s unclear how much education each wizard gets before they go to Hogwarts (side note, J.K.: there should have been a wizarding preschool or something).

And if remember Hagrid’s backstory, you’re probably yelling at your computer screen about how Hagrid didn’t actually complete his degree (?) at Hogwarts because he was expelled for being friends with that giant spider that definitely doesn’t make me squeamish when I see it. But that is during his third year. He was at least 13 years old and possibly 14. If a 13 year old couldn’t make an attempt at sounding out a three syllable name, you would be worried about him. But since Hagrid is a wizard giant he gets a pass? I don’t think so.

Hogwarts has classes in Charms, Potions, Herbology– you name it. How hard would it be to squeeze in a couple courses on phonics? I’m not saying they need to have an entire standard school curriculum with math or whatever, since wizards are über libertarian and don’t pay taxes. But we do know that wizards read. In fact, the library is an essential part of the plot in most of the books. And it makes sense that Hermione is the most well-read character since, unlike most of the student population, she had a good five years of standard, normal human education! It’s no wonder Ron can’t pronounce “Leviosa” correctly– he was never taught phonics! 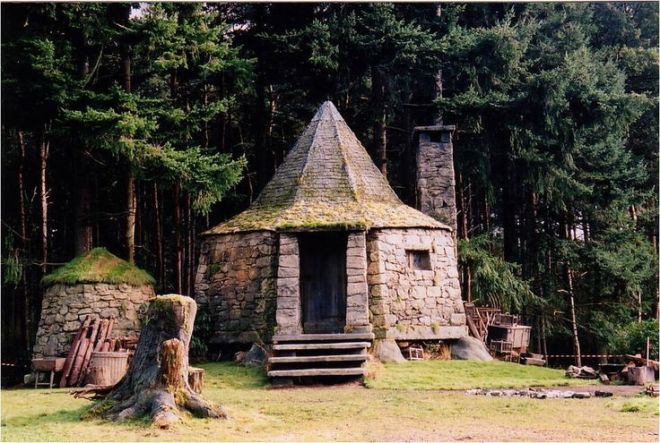 When Hagrid told Harry that he couldn’t spell the guy’s name, and then Harry learned that the guy’s name was as simple as “Voldemort,” Harry should have said, “I don’t know if you should be responsible for keeping me safe since you are rendered useless by polysyllabic words.”

Growing up, I thought Hagrid was only the “keeper of the keys” because he was somewhat of an outcast, but now I realize they give him that job because he couldn’t read lesson plans. When Dumbledore looks out of his window and sees the shack Hagrid lives in, he should consider it a symbol of shame. Shame that he and his school are unable to impart a skill most of us learn in second grade.

We Need to Talk About Hagrid’s Education